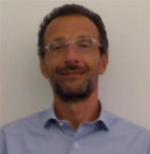 Andrea Bianco is Full Professor since 2011 and Department Head since 2015 at the Dipartimento di Elettronica e Telecomunicazioni of Politecnico di Torino. His current research interests are in the fields of packet switching systems, SDN and programmable networks, and algorithms and architectures for all-optical networks. He has co-authored more than 200 papers in international journals and conferences. His h-index on scopus is 25 with more than 2600 citations.

He was Area Editor for the IEEE Journal of Lightwave Technology (2013-2018) and since 2010 for the Elsevier Computer Communications journal. He was member of the HPSR steering committee in 2015. He was Technical Program Co-Chair for: IEEE HPSR 2003 and 2008, DRCN 2005, IT-NEWS 2008, IEEE ICC ONS symposium 2010, Networking 2015 and IEEE GLOBECOM NGN Symposium 2015. He was a member of the TPC of several conferences, including IEEE INFOCOM, IEEE GLOBECOM, IEEE ICC, IEEE HPSR, IFIP ONDM, Networking, HotI, and many others. He was co-editor of two books and of four Special Issues.

He led as National coordinator the MIUR projects SFINGI, on virtualization in software router, and BORA_BORA, on scalable software routers. He was involved in the European projects FEDERICA on network virtualization, STRONGEST on optical networks, ECONET on energy saving in networks. Previously, he was in charge, for Politecnico di Torino, of the MURST project RAMON on mobile computing. He also participated in several others National and European projects: the European NoE on Optical Networks e-PHOTON/ONe and BONE,the IST project DAVID on an optical MAN based on interconnected rings, and the European ACTS project on a single layer optical network SONATA, the Italian MIUR projects OSATE, RINGO, IPPO, and WONDER on optical networks, EURO on software routers and MQOS on quality of service issues. He was also involved in several research projects with private industries, including BT, Lucent, TILAB, CISCO and Alcatel.